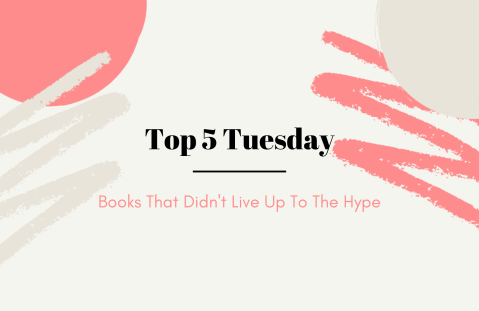 Top 5 Tuesday is a weekly meme hosted by the amazing Bionic Book Worm!

Today we’re talking about books that didn’t live up to the hype and I am HERE FOR THIS. I’ve been holding back my feelings on some of these for so long and I can’t wait to let them free. Here. We. Go.

So, apparently everyone except me thinks Cruel Prince is sooo amazing. I, however, thought the first two-thirds of this book were super boring and it took FOREVER for any real action to happen. Jude is the worst spy ever and is annoying AF. Taryn is the worst sister ever and is also annoying AF. Prince Cardan is the worst person ever and is slightly less annoying than the others, but still…annoying AF. My little cinnamon roll Oak is precious though, and nothing better happen to him in Wicked King. The ending saved this entire book for me, but still…didn’t live up to the hype.

Six of Crows by Leigh Bardugo

I was SO excited to read this duology, but for some reason it just didn’t resonate with me. The heists and con jobs are super slick – like The Italian Job but 100 times more intense -but the story itself isn’t that great. I also did NOT appreciate the ending of Crooked Kingdom. I’m still salty over that unnecessary death. Let’s not forget about Kaz Brekker and his crew. I didn’t connect with any of them or find Kaz to be the book boyfriend everyone hyped him up to be. Overall, I could live without re-reading this one.

I was so sad when I finished this book because I was disappointed to the max. I had heard amazing things and the premise of time being bound to blood is interesting, but Holland’s writing seemed more like disjointed, semi-finished bursts of thought and it was a bit more juvenile than I would have liked. Now on to Jules, the “heroine”. She isn’t the brightest bulb in the bunch and most of the conflicts that happen could have been avoided if she would have just listened to literally everyone around her. I couldn’t enjoy the story at all because I couldn’t stop thinking about how slowly Jules caught on to important things. This is definitely one I won’t be recommending to my friends.

I’m not a big fan of alien stories but The 5th Wave caught my attention for some strange reason, so I gave the first book a try. I loved it but the rest of the series is so. horrible. This was another one that I had heard great things about and the buzz just grew once the movie came out, but it is not worth the hype. Another story where unnecessary death takes place and writing meant to be “thoughtful” just ends up being bland, boring and a bit confusing.

This is another series where the first book is amazing but it all went downhill after that. The ending of The Death Cure seemed like such an afterthought to Dashner, like he just started writing before figuring out how it was meant to end and picked out an option from a bowl and said “yup, let’s go with this one. Seems legit.” There was such hype after the movies came out, but not even Dylan O’Brien could save this one. It’s still overhyped.

What did you think of my picks? What books are overhyped for you?

View all posts by readbydev